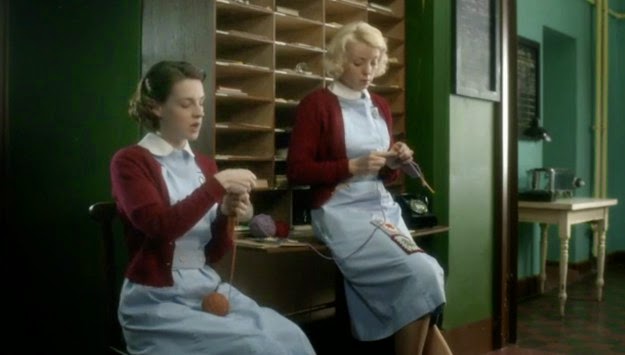 After the hysteria of the last week‚ I like many others needed to take a break from reality. A little Netflix and chill. Of course when I say chill I mean relaxing‚ not what the kids mean.

I love period dramas. Like many of you‚ I lived for Downton Abbey. I watch every Jane Austen movie. “Put a corset on it” should be my catch phrase. So Call the Midwife showed up as a suggestion in my Netflix feed.

As a knitter‚ I was overwhelmed by the quantity of beautiful sweaters and blankets. Just about every baby (and there is at least one new one per episode) is adorned in one or the other. There is often a story behind the piece‚ something made special or a heirloom. They are all special and different‚ I can’t imagine the costume department!

The women in the cast are often shown knitting at their leisure. I would have thought they really knew what they were doing until one episode where a nun is shown with 2 needles in a obviously crocheted granny square. so disappointed.

Oh‚ so Call the Midwife is based on the memoirs of Jennifer Worth. It is about a nurse working in London’s East End and takes place in the late 1950’s and early 60’s‚ at the beginning of national healthcare. Of course there are lots of babies‚ but it also touches on women and family issues affected by the changing times. 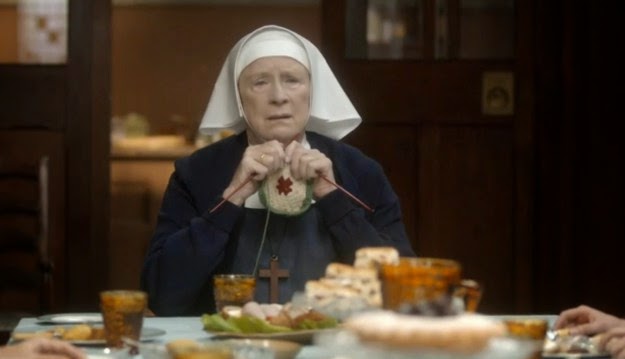 If you have yet to watch this show‚ go check it out. There are 51 episodes sure to inspire you with hand knits.

Also‚ be sure to enter the giveaway for November 2016.

Halloween is over and Thanksgiving is just around the corner. The air is beginning to have a chill. This is the time of year when knitters begin to pull out their handmade scarves and sweaters‚ showing off their handywork to the world. We would call this the most wonderful time of the year.

Since I am a knitter and in such good spirits‚ I have decided that it is time to have a giveaway! You will win a prize package containing one of my brand new knit kits and a collection of badges for decoration. Excited? I am too 🙂

Here is how to enter‚ one entry for every step:

Are you as much in love with knitting as I? Are you a newbee or wannabe just discovering the craft? I want to tell you that you are welcome here with open arms.

I have been an artist my whole life‚ I only fell for knitting 1’ years ago. I was not taught by my grandmother or mother like so many of my friends‚ I was taught by a woman my own age I met at a local stitch and bitch. What a welcoming community‚ embracing the crafter and artist alike! People working with acrylic and vicuña sit side by side‚ admiring each other’s handywork.

For years I have been knitting golf headcovers. These items have a huge following amongst non-knitters‚ but I was sad that I could not give back to the people I connect with most closely. What would I want if I was giving a gift to myself?

Presenting Knitter’s Jewelry by Tracey Knits. These pins‚ earings‚ necklaces and bracelets all have a yarn lover‘s heart in mind. Be literal with a silver tone ball of yarn charm or a tiny work in progress pin. Share your love of string with a playful kitten hanging from a bangle. And of course sheep.

Check out the collection in my shop on etsy. New items are going up all the time. You can also find knit kits perfect for new knitters and patterns for all levels.

Getting feedback like this makes it all worth it.

I get these custom requests all the time; a proud alumnus contacts me to design a golf headcover that looks like his college mascot. This one‚ however‚ was special. This man WAS his college mascot. You can imagine how special this golf club cover would be for him.

He had a few requests that were special: his team logo‚ sized to fit a driver‚ etc‚ but nothing too hard. I completed it and sent his a pic just to make sure it was to his liking. He made a few small changes and we had a finished custom golf head cover.

I am always happy to work with customers like this and I am so pleased that he got just what he wanted. If you have a golf headcover you would like designed just for you‚ feel free to contact me and I will work with you to make it happen.

I have been talking up the new items I am adding to my shop for a few weeks now and the time is finally here.

Have you always wanted to learn to knit? Are you fairly new and looking for an easy knitting project that looks great? Are you an experienced knitter who knows a good deal on an all inclusive knit kit?

If you are any of these things‚ you are going to love my Moss Stitch Infinity Scarf Knit Kit. The kit includes just about everything you need to make this fashionable accessory. You get 100% wool yarn‚ knitting needles‚ pattern‚ measuring tape and a darning needle. All you need is a pair of scissors. You can also find free video tutorials on my youtube channel.

I am currently stocking the kit in my shop in just a few popular colors‚ so if you don’t see what you are looking for please ask. You May be pleased to find out that color is on its way.

So what do you think? Would you knit your very own scarf? Would you rather have me knit it for you?

PS: Huge thank you to my gorgeous model‚ who I also made‚ my daughter. You can check out her videos on youtube.

I have been knitting Golf Club Covers for a few years now. 5 to be exact. And I have loved every minute of it. But it was time to bring in some new designs.

Over the summer‚ I have been working like crazy on a line of winter woolies that I think you are going to fall in love with. The best part? You can knit them yourself!

Some of you are saying “but I like when you make them for me.” Well‚ I am happy to continue doing that‚ but I want to share my joy of making with the world and this was a way for me to do that.

All of the new patterns will be available as kits in my shop. Just need the pattern or the needles? All will be sold separately as well. Want to learn how to knit? I will be holding workshops‚ or you can go to my youtube videos anytime.

While I am all about fun‚ these are some seriously great items. All of the new items are made with high quality 100% Wool yarn. The kits include a ball of that beautiful fiber in the color of your choice‚ a simple pattern‚ wood knitting needles‚ measuring tape and darning needle.

Are you as excited about these new options as I am? Probably not‚ but I can’t wait to bring the joy of knitting to new people. You can see everything as I add it in my shop on etsy‚ or you can follow me on facebook and twitter. If you want to host a knit kit party in New Jersey‚ contact me and I will be happy to make arrangements.